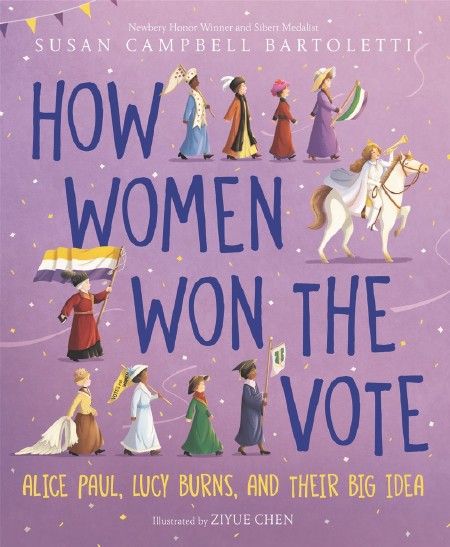 How Women Won the Vote

In time to celebrate the 100th anniversary of a women’s right to vote in America comes the riveting story of the two trailblazers who planned the historic Women’s March of 1913, paving the way for the passage of the 19th amendment—from Newbery Honor Medalist Susan Campbell Bartoletti. Includes over one hundred photographs and illustrations.

Get immersed in the excitement and thrill of a country undergoing dramatic social and political change! Meet the women who weren’t afraid to use radical tactics, pull off a huge parade, picket President Wilson outside the White House, go to jail, go on hunger strikes, and fight until a federal amendment to the US Constitution was ratified.

Look at photos and illustrations that put you right there, during a brilliantly planned and choreographed march and pageant demanding an amendment to the constitution of the United States! The Women’s March of 1913 was an incredible sight to behold: over five thousand suffragists marching, nine bands, four mounted brigades, twenty-six floats—all marching past 250,000 spectators. There was even a riot!

Perfect for the many historical institutions and educational organizations who are celebrating the anniversary of the ratification of the 19th amendment and for Women’s History Month promotions.